The forest of Broceliande is Brittany’s most popular and spectacular forest spanning 11,000 hectares. When I first came to live in Brittany in 2002, I was pleasantly surprised by its culture, traditions and folklore. Then when I learned that most of King Arthur’s adventures took place in Brocéliande, I was excited. After all, which child has not been enchanted by the Arthurian legends of King Arthur, the Knights of the Round Table and Merlin!

So how did English literary heritage reach Brittany? As you may be aware, Brittany’s history and its Celtic culture are a stark contrast to the other French regions. According to the medieval poet, Chrétien de Troyes, Arthurian legends came about after the fall of the Roman Empire when Brittany (Little Brittany) and Great Britain were part of the same continent.

The truths behind these legends are since buried in the sands of time.

For the Bretons, one of the most important personalities is Merlin who was supposed to have been the offspring of the devil and a pious woman. Merlin fell terribly in love with Viviane, a fairy and also known as the Lady of the Lake. She was the daughter of Lord Dymas and was born in the Chateau of Comper located in the heart of Broceliande. Merlin ignored his role as Arthur’s advisor and revealed all his magical secrets to Viviane. He also built a crystal palace in honour of her beautiful eyes. The palace is reputed to be hidden in the Comper lake.

The legend goes on to say that after having used Merlin for this purpose, Viviane placed him into a deep slumber and imprisoned him in this forest. Viviane raised Lancelot, son of King Ban, in the crystal palace. Moreover, Lancelot’s sword, Excalibur, was forged in Comper. When Lancelot left to serve King Arthur as a Knight, Viviane returned to Merlin. It is believed that their magic still lingers in this forest. 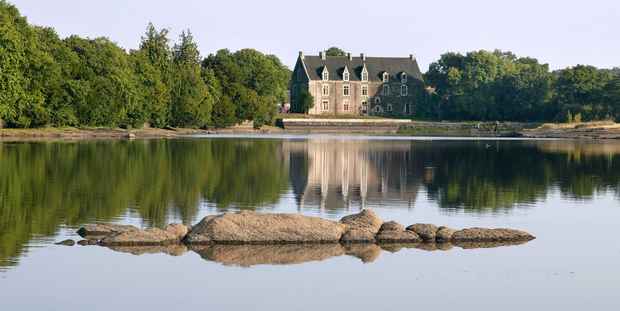 The 13th century Chateau de Comper, located near Concoret, houses the Arthurian Centre which is devoted to its legends. It organises an annual exhibition on Arthurian legends, as well as holds a cultural season with events such as the “Pentecost of King Arthur”, “Encounters with the Imaginary of Broceliande” and the “Dragon Week”. The Centre has won public recognition through the promotion of Arthurian art, culture and history. 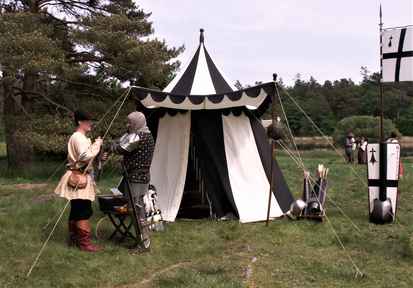 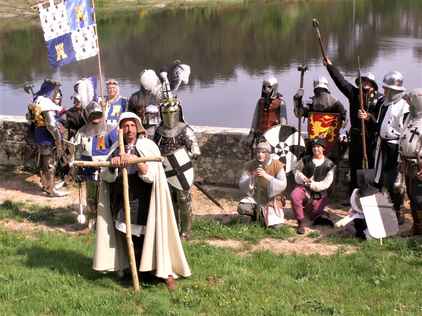 For more information on the Chateau of Comper, do visit their website here.

This is one of my favourite castles in Brittany. It was built in the fourteenth and fifteenth centuries by the Trécesson family and sits on a lake. Although it is privately owned, it is a national historic monument.

It is believed that the castle is haunted by the White Lady. According to the legend, when the castle was in the hands of the Trécesson family, poachers saw a carriage pull up. Two men came out, dug a grave on the banks of the lake and buried a young bride alive. Ever since that fateful day, her spirit haunts the castle during a full moon night. There are also stories of playing cards moving mysteriously in a bedroom as if the spirits were continuing to live their lives. 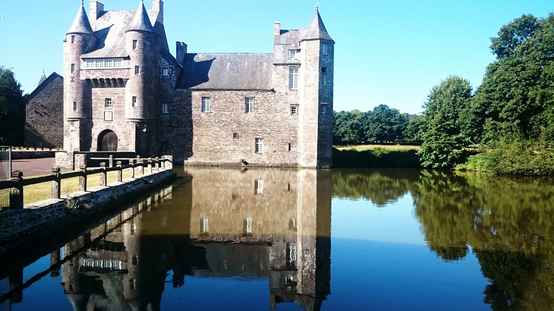 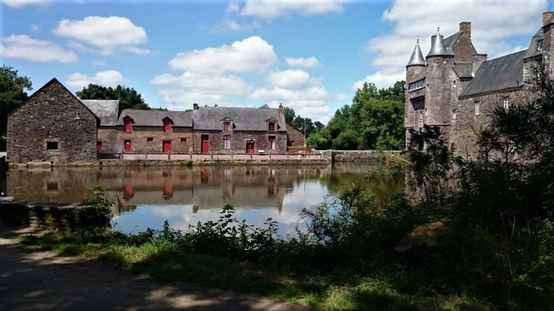 On a lighter note, the Chateau was for sale on the market and apparently, there will shortly be a new owner. Have a look at the advertisement here to see rare pictures of the property inside!

Due to the change in ownership, I am not sure if the castle grounds and chapel can still be visited. 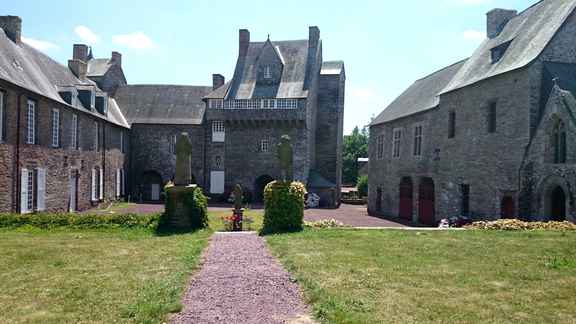 Paimpont is a small town that lies in the heart of the Broceliande forest. It is a very popular tourist spot and one of the starting points for visits to the forest and neighbouring sights.

This immense building lies alongside the lake of Paimpont. Its origin as a priory goes back to the 7th Century. However, nothing remains of this priory and the edifice that one sees today is a result of lengthy transformations over the centuries dating from the 13th Century onwards. It now houses the abbey, the presbytery and the town hall. 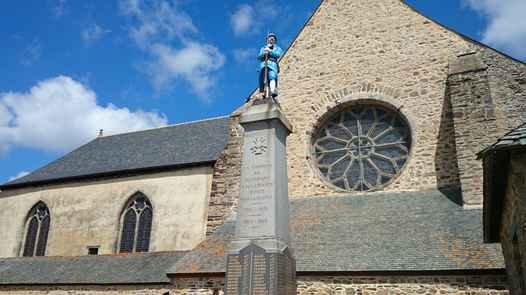 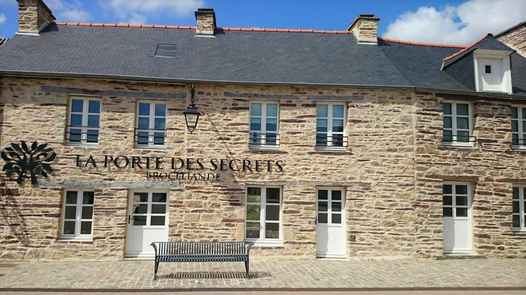 If you are looking for information on Brocéliande and its legends, look no further! It is situated in the former outbuildings of the Abbey and is an experience that cannot be missed. For those who wish to eat and drink, there are many restaurants and cafés in the vicinity.

In 1656, Les Forges de Paimpont (foundry) was set up in the Paimpont / Brocéliande forest. There were then substantial iron ore deposits, a hydraulic system and charcoal to run the blast furnace and the refinery. It appears that some orders were even sent to supply the American War of Independence!

During the early 19th century, two blast furnaces, a rolling mill and a coke-fired foundry were built. Some 250 people worked there during its peak production. However, the two blast furnaces closed down in 1884 due to foreign competition, but the foundry business continued until 1954.

In 2001, the Forges was listed as a national historic monument. It is privately owned and has undergone extensive restorations. 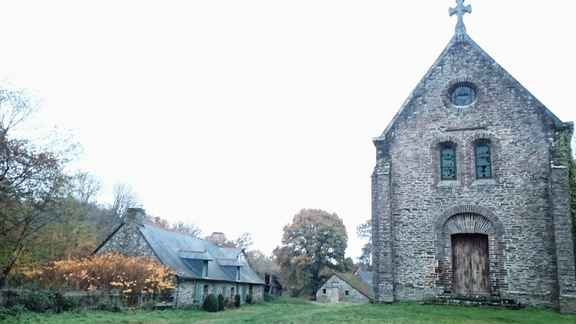 You will notice many workers’ cottages and a chapel a few metres away from the foundry. 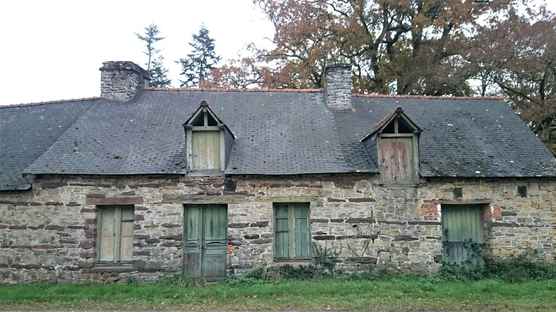 There is a beautiful lake opposite the foundry. Beyond that you will notice an impressive manor house.

Do click on this link to watch a beautiful video and to obtain more information on visits.

Le Val Sans Retour (The Valley of No Return)

This natural site, bursting with rich biodiversity, is located near to the pretty village of Tréhorenteuc, to the west of the forest. It is an ideal place for hiking to places like Fairy Morgane’s Domain (Domaine de la Fée Morgane) and the legend of the Fairies’ Mirror (Etang du miroir aux fees) which is the first of many lakes in the area. It is said that the Fairies’ Mirror was the home of seven fairy sisters, including Viviane.

In 1990, the Val sans Retour, where Fairy Morgane is said to have imprisoned unfaithful lovers, was ravaged by a fire. Extensive reforestation work was undertaken and to mark this effort, the sculptor, François Davin, created the Golden Tree. The charred trunk of a chestnut tree was covered with 5000 gold leaves to symbolise the vitality of nature.

For those who love walking, there is a megalithic monument which is Fairy Viviane’s house (Hotié de Viviane), previously known as a Druid’s tomb.

In the 19th Century, this site was initially a megalithic burial ground: a 12-metre long red shale covered gallery dating back to the Neolithic era. This monument is located to the north of the Broceliande forest and now comprises of two upright stones set against each other.

There used to be a majestic fountain nearby surrounded by large stones. It was a place of worship for the Druids who used to count and wash the newborns of the year during the summer solstice. All that remains today is a stream which is fabled to have brought eternal youth to whoever drank from it.

Not far off, you can find a 3 metre tall standing stone cut out like a seat for Merlin.

For more information, do visit this link on its remarkable trees and nature. The photographs are breathtaking!

For those who wish to learn more about this magical place and want to visit the various attractions in Brocéliande, do visit the official Broceliande Tourist website in English.

Please note that all photographs given here are mine apart from the view of the Chateau of Comper (Creative Commons). Should you wish to use them, please contact me first.

If, by any chance, Brocéliande has incited you to relocate to my wonderful region, do give me a call or write to me! I would be delighted to help you make Brittany your home.

Thank You For Sharing This Story!

About the Author: Aiesha Bonneau

How to reach us